Cape Cod Commission staff are working with the towns of Barnstable, Bourne, Brewster, Dennis, Eastham, Orleans, Sandwich, Wellfleet, Truro, and Yarmouth to examine vulnerabilities in the roadway network and identify adaptation alternatives. With funding support from the U.S. Economic Development Administration and the Massachusetts Municipal Vulnerability Preparedness program, the Commission has contracted with the Woods Hole Group to conduct a vulnerability assessment of roadway segments, bridges, and culverts due to flooding from the combined effects of sea level rise and storm surge. The project employs state of the art modeling and community engagement to identify and prioritize low lying roads to target for coastal resiliency action.

The project kicked-off in September 2021 and will be complete in Spring 2023. Additional funding opportunities are being explored to work with the remaining towns on Cape Cod as well as advance the design of key roadway segments identified through these analyses.

Explore the tabs below to learn about the project elements and process. Click the images on the right to access quick links to individual pages on each of the participating towns’ project materials.

Low lying roads are areas prone to flooding from the combined effects of hazards such as sea level rise, storm surge, and erosion. Upstream freshwater flooding events that have no ocean-based component are not included in the low lying roads project. Cape Cod is especially vulnerable to coastal storms because of its unique geography and roadways that travel through ever-changing environments. Flooding is currently a regular event on several road segments during extreme high tides and storm events. As seas rise and storms intensify the impact to our coastlines and flooding occurrences will increase in frequency and depth.

Roads are more or less likely to flood depending on a number of factors such as proximity to the coast and road elevation. Significant rain events may also result in inland road flooding, but are not a focus of this project. The vulnerability of a road is determined by the probability or likelihood that it will flood on an annual basis. The terms vulnerability and probability are used interchangeably in this project. The probability of a road flooding annually is determined by the elevation of the road surface as compared to the elevation of the anticipated water surface during a storm event, under future time horizons.

The project team used regionally available data to score roads and road segments according to their criticality within a community. Criticality is how important a road is to the community’s transportation needs. The scoring framework used to determine road criticality includes variables such as:

1. Usage/Network function - the type of road and average daily traffic 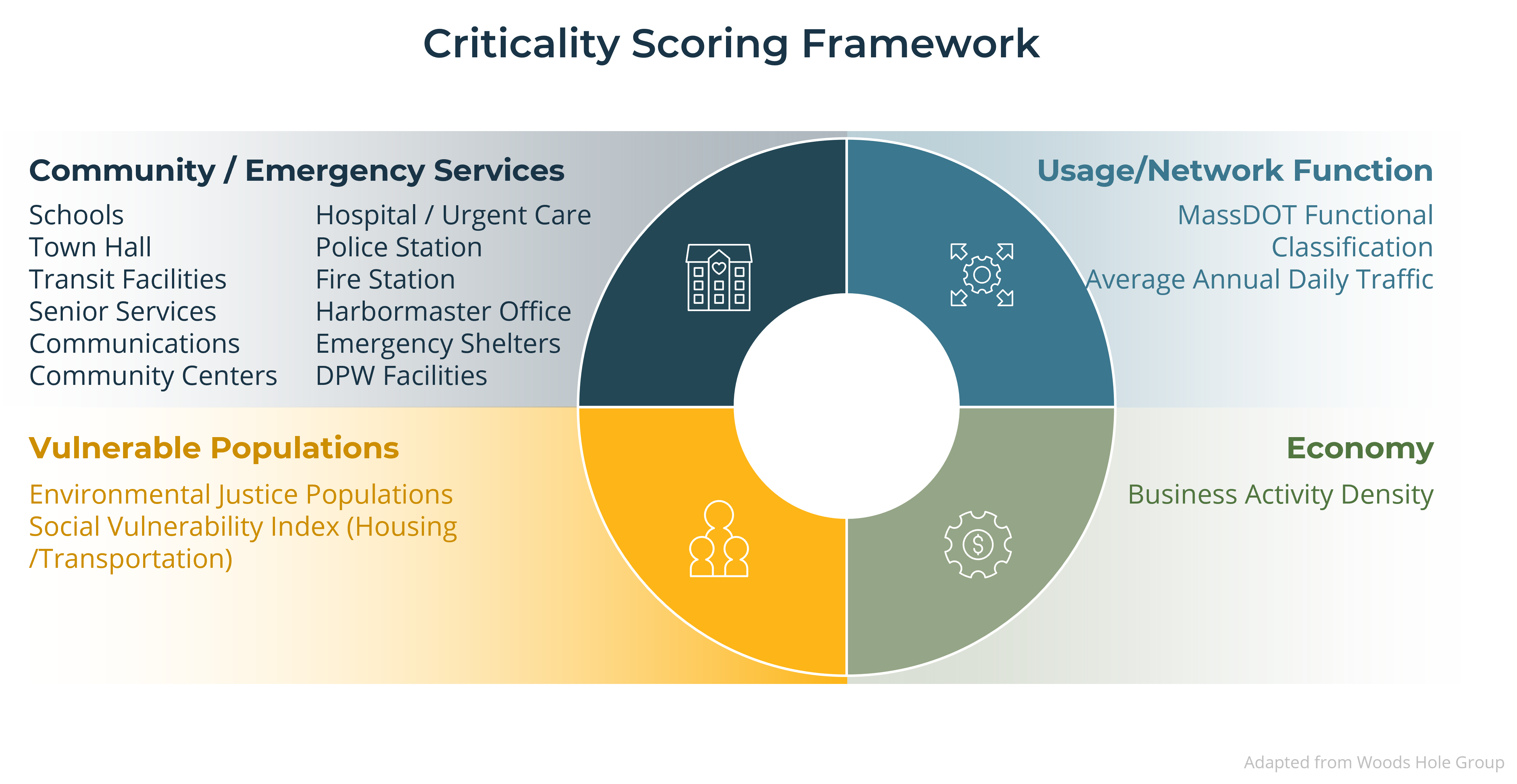 For this project risk is more than the probability of flooding. It is defined as criticality times vulnerability. The roads in a community that are both highly critical and have a high probability of flooding are ranked as high-risk roads or road segments that may require adaptation alternatives, as depicted in this visual.

The low lying roads project utilizes the Massachusetts Coast Flood Risk Model (MC-FRM), a state-of-the-art model that projects flooding under future time horizons. The model includes the dynamic impacts of tides, waves, wave run-up and overtopping, storm surge, winds, and currents over a range of storm conditions to generate the probability of inundation. The MC-FRM generates hydrodynamically modeled projections for sea level rise and storm surge to determine projected changes in the likelihood of flooding under climate conditions for 2030, 2050, and 2070. The model uses inputs displayed below to create multiple outputs. Flood probability and flood depth are the primary outputs used in this assessment to evaluate roadways.

The results of the model include assessments of high tide flooding, inundation probability, criticality, and risk for the entire town.  A list of top priority roads that have a high flood-risk is developed from these town-wide results. The list provides the road name, the length of road segment that will flood, and the probability of flooding under each time scenario: 2030, 2050, and 2070. The model results have been compiled into an interactive map viewer displaying inundation probability, and criticality scores, to determine the top vulnerable roads for each town. 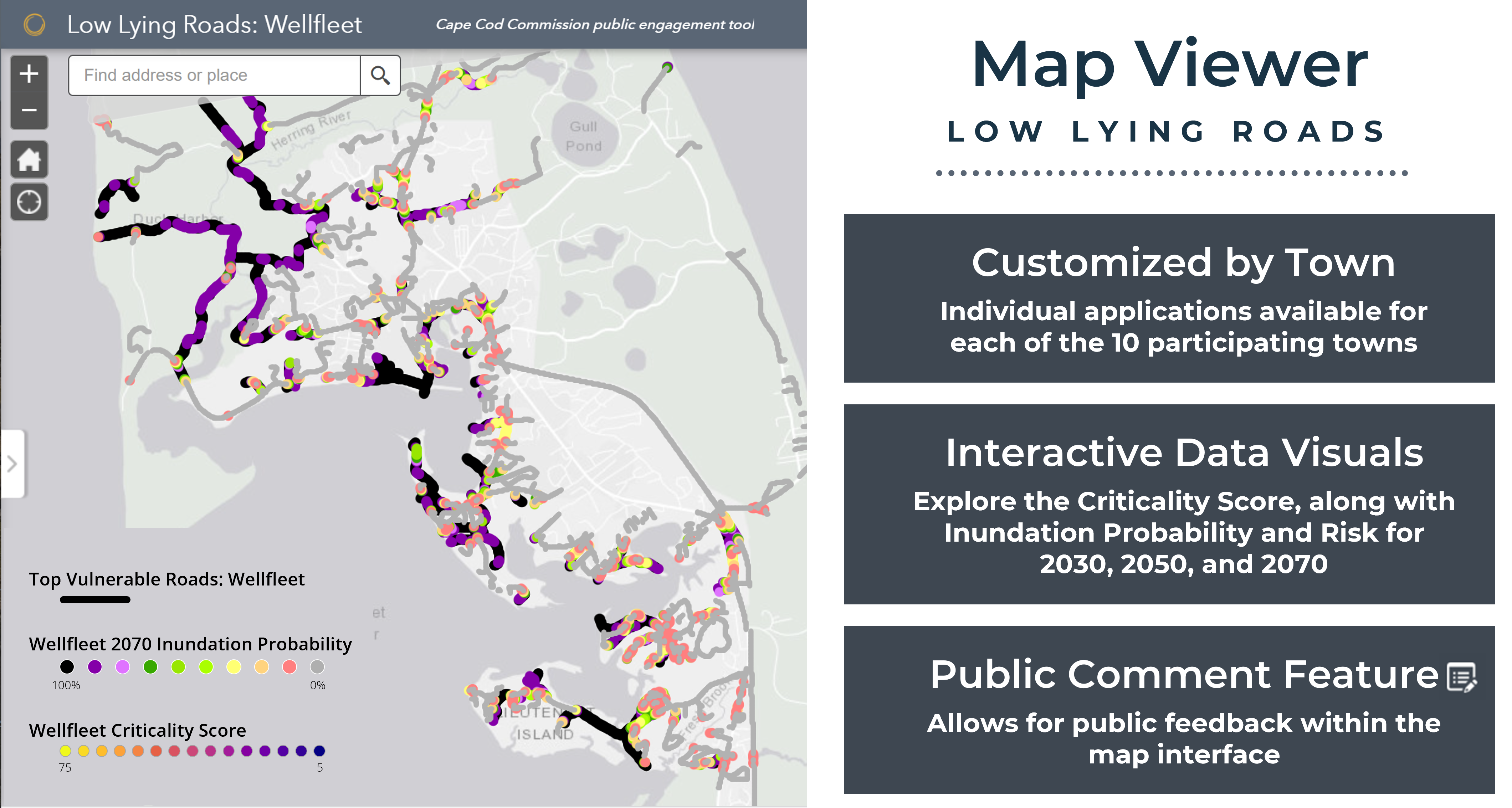 The various design options identified may offer a range of approaches.

Green infrastructure, also known as nature-based solutions, are engineered designs that mimic or enhance natural processes. Green infrastructure has the potential to provide co-benefits, such as creating habitat or improving water quality. Examples include dune nourishment and enhanced marsh habitat.

Other approaches include realignment of roadways or managed retreat, which is the purposeful and coordinated movement of infrastructure (e.g., roads) away from the risk (e.g., flooding). See Managed Retreat StoryMap [Managed Retreat (arcgis.com)].

The spectrum of possible strategies ranges from “do nothing” to “coastal armoring.” The most feasible solutions will consider site conditions and likely combine green and gray options.

Fact sheets on the spectrum of coastal adaptation strategies are available here: https://ww2.capecodcommission.org/coastal/

Coastal resilience: the ability of infrastructure and or resources located along the coast to recover from the impacts, erosion, and forces it sustains from storm surge and flooding.

Criticality: the importance of a road in a community or region.

High Tide Flooding: refers to flooding that occurs at high tide, in the absence of a storm event. High Tide flooding is also referred to as nuisance flooding or sunny day flooding. In the case of the maps produced for this project, high tide flooding shows the area where the road is below Mean High Water elevation.

Hydrodynamic: forces acting on or exerted by fluids, in this case water.

Probabilistic: A statistical calculation of percent chance a storm will occur in any given year. These probabilities do not necessarily represent real world occurrences.

Probability: the likelihood a road or road segment will flood. Interchangeable with vulnerability.

Risk: for a road segment, the criticality score multiplied by the probability score. Or the likelihood that an important road will flood during storm events.

Vulnerability: the probability of flooding. Interchangeable with probability.

Additional towns will be added as workshops are scheduled. 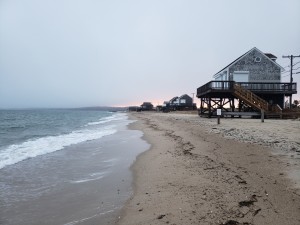 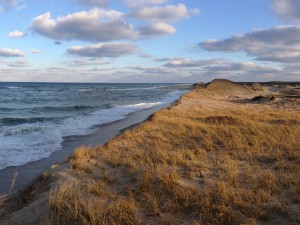 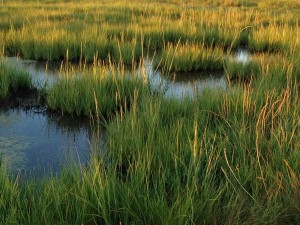 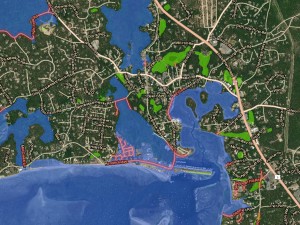 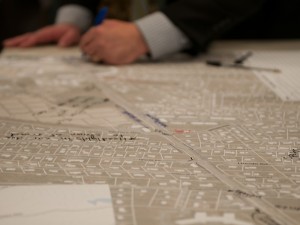 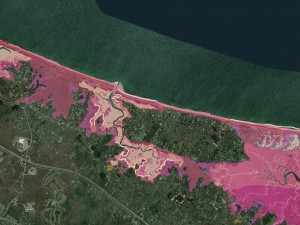